The Factory and RR are two versions of the 2017 Aprilia V4 1100 Tuono. Which one you pick depends on how much adrenaline you want on display either on some B-roads or the race trac..  While neither version would fall into the category of “sedate,” the Factory ABS version is amped up on some important performance details for best results in serious track work.

All those technical delights would probably be enough to get your heart beating a little but more quickly by themselves, but the Aprilia Tuono V4 1100 Factory ABS pours it on with even more.

So how does all the high-tech wizardry and horsepower perform on the street and track?  Here’s what the experts say.

Editors at Cycle World magazine was so impressed with the RR in their four bike comparison; hey unanimously picked the Tuono RR as tops in the test over the BMW S1000R, KTM 1290 Super Duke R and the Yamaha FZ-10.  Their conclusion: “We were all in agreement that the Aprilia Tuono 1100 RR ranks right at the top both road and track.  It possesses true superbike performance in every area: engine, electronics, handling, and brakes.  And it does so with a degree of civility, and Italian spice and flair that inspires you physically and emotionally to desire more track time following a two-day road ride.  And that is a mountain of evidence in our book.”

Cycle News was duly impressed with the Bosch ABS brake system featured on both bikes. Special test rider Mark Miller, a former Isle of Man TT competitor, said: “For the electronics, there’s a newly enhanced Bosch 9.1 ABS system which now adds a lean sensor. While tearing up the race track I could, for the first time in my life, feel confident grabbing a big heap of extra front brake (just to test the ABS) while still leaned over into a corner. Even with the Cornering ABS system set at its least intrusive Level 1, which is still accompanied by Aprilia’s new RLM (Rear Lift Mitigation) system, the attitude of the bike would not stand up during braking, nor would the front wheel lock no matter how hard I tried.”

Ultimate Motorcycling had the chance to thrash both versions at the Circuit of the Americas (COTA), and found loads of love for both versions.

Ultimate’s Online Editor, Ron Lieback said, “The 1077cc 65-degree V4’s 173 horsepower and 89 ft/lbs of torque is more than enough for the Tuono on the racetrack, even a longer one like the 3.4-mile COTA. The engine was mildly massaged with DLC surface treatments on the piston pins and honing treatment on the connecting rod surfaces, helping to ease revving. It also receives a new ECU that allows the engine to rev 500 rpm higher than before, for a new redline of 13,000. This engine feels as strong as the RSV4 throughout the mid-range, and only lacks the top-end pull of the superbike.”

Lieback found the brakes and handling to his liking: “The Tuono’s Cornering ABS is magical. I experimented with heavy braking while at serious lean angle at COTA’s turn one, and the bike never felt like it was slip out from under me. The three-level ABS system was happiest in level 1 at the track, which provided no feel of integration.”

On the Brembo brakes, Lieback was unequivocal: “These are the best brakes on the market, and provide serious stopping power. The feel at lever is light, and provides a sensitive feeling of power when trail braking.”

Test rider Tom Roderick of Motorcycle.com, also at COTA, yielded similar praise, particularly about the operation of the quickshifter: “If the Tuono was considered an excellent streetfighter-cum-trackday bike before, its upgraded electronics for 2017 – especially the up-and-down quickshifter – blur the lines even more. Around COTA the quickshifter worked flawlessly, rowing the gearbox in either direction at my command, allowing me to focus on the rapidly approaching next corner.”

Roderick concluded its comparison of the RR and Factory Tuonos saying, “The choice is yours, but if you’re desiring the best track-going hooligan out there, look no further than either Tuono.”

Motorcyclist editor Zack Courts also took to the track at COTA with both versions of the Tuono and came away saying, “The big news for the mighty Aprilia Tuono in 2017 is more refinement. Everyone seems to agree, for now, that 1,077cc of V-4 power is enough to get the job done, so the Tuono gets a full-color TFT dash, a Euro-4 compliant muffler, and cruise control. The rest of the bike is largely the same, and that’s a good thing—massive power, strong brakes, a race-bred chassis, and decent daily comfort are all still intact.”

The media has spoken, but Miller of Cycle News summed the new Tuonos best: “Who cares if the Tuono isn’t ideal for cross-country trips or hardcore short circuit racing? Just wheelie and back the thing in all over town, tear up and down your best twisties, enter it in Pikes Peak Hill Climb (if you’re brave enough), then wipe off the bugs at the end of the day.” 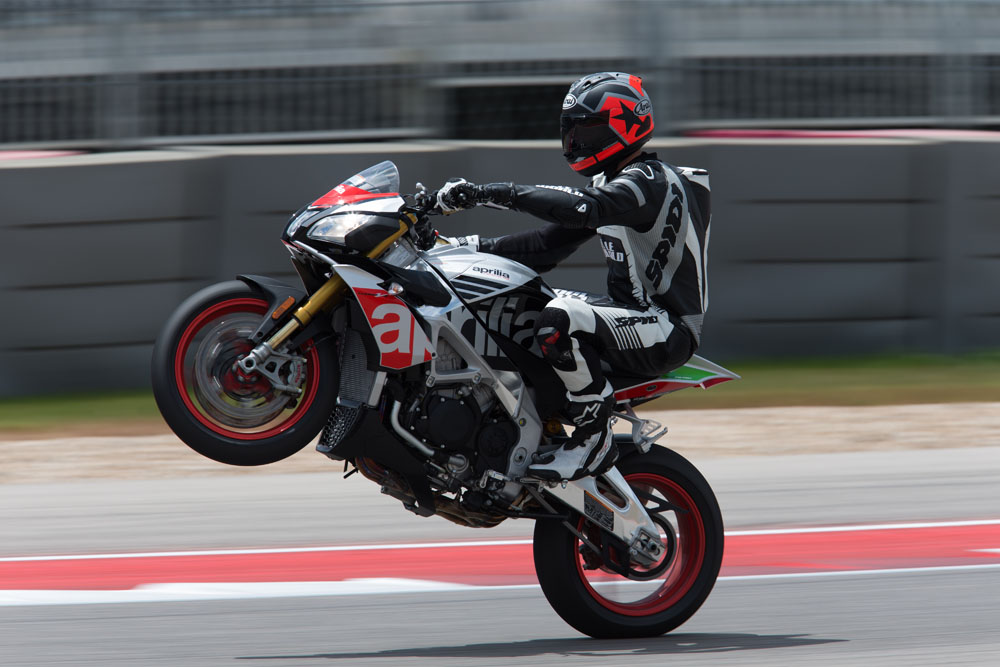