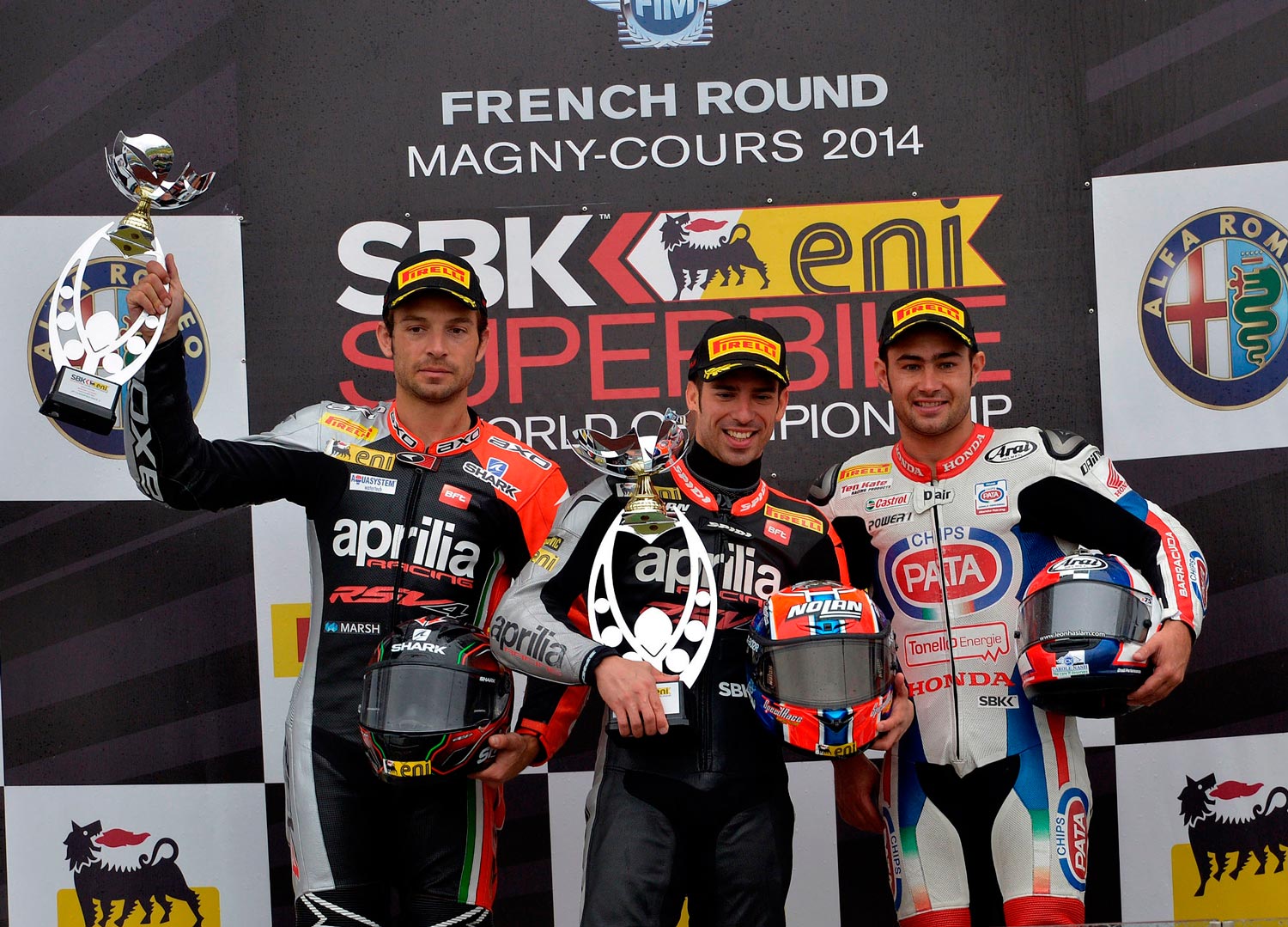 YET ANOTHER DOUBLE ONE-TWO IN BOTH FRENCH RACES FOR THE APRILIA RSV4s
GUINTOLI WINS RACE 1 WITH MELANDRI SECOND, MELANDRI FIRST AND GUINTOLI SECOND IN RACE 2
APRILIA LEADS THE MANUFACTURER WORLD CHAMPIONSHIP
GUINTOLI MAKES UP MORE POINTS AND IS NOW JUST 12 POINTS FROM THE RIDER CHAMPIONSHIP LEAD Magny-Cours (France), 5 October 2014 - The Aprilia RSV4s are proving to be unbeatable in this final phase of the 2014 World SBK season. On the French track at Magny-Cours Guintoli and Melandri divided the spoils with one win each, also taking turns on the second step of the podium in both races. This is a one-two that rekindles Guintoli's ambitions in the Rider Championship. The teams will now go to the Qatar round with just 12 points separating Guintoli from championship leader Sykes.
With this exciting season finale Aprilia has stepped over Kawasaki and now leads the Manufacturer World Championship with a 23 point advantage in demonstration of the RSV4's domination on the track.

The script for the two French races, wet and characterised by a lot of crashes, was very similar. The Aprilia RSV4s and their riders demonstrated a crushing superiority - as occurred on a dry track at the previous round in Jerez.

In both races Guintoli was the one to do away with the niceties and break away at the front.
Only Melandri was able to leave the pack behind to join his runaway team mate, demonstrating his ability to win already in the first part. Guintoli's victory in Race 1 allowed the rider from across the Alps to earn some precious points in terms of the world championship. In Race 2 Marco, after catching up and taking the lead from his team mate, built up a clear advantage, going on to win his sixth race of the 2014 season. With the second place finish Guintoli made up some very important points on Sykes, continuing his exciting comeback which takes him to just 12 points from the top spot going into the final round at Qatar.

Aprilia Racing Manager, Romano Albesiano: “The results of the last few races are extraordinary - five wins out of six which have taken us into the lead in the Manufacturer standings and placed us in the best possible conditions to attack the leadership in the Rider championship. This is further proof of Aprilia's value and the absolute competitiveness of our RSV4, a project that continues to be victorious four years from its inception with five World Titles under its belt. We'll be going to Qatar to sell our lives dearly”.

Sylvain Guintoli: “This was a great weekend for the Team. We are definitely back in the running for the Championship. When I saw the weather forecast yesterday evening I immediately thought that this would be a good opportunity to get some important points. I took a few risks at the beginning of the races and then, once I had created a good gap, I concentrated on staying focused to avoid any pointless risks and to take home the best possible result. I'm very happy but I am already thinking about Qatar, where the championship will be decided. It is a track that I know well and that I like and I think it will suit the RSV4 well. I wish we were racing tomorrow!”.

Marco Melandri: “Today we did a great job. The bike was fantastic and I was able to confirm my performance in Jerez. Sylvain was very fast and in the first laps it was difficult to overtake, but we created a good gap in front of our rivals straight way. The win in Race 2 is fair compensation for my efforts and those of the Team, and on top of that it put me in third place in the standings. I have demonstrated a good pace from the halfway point of the season, so now we'll see how things go in Qatar”.