Podium and points for Milwaukee Aprilia in Round 9 at Misano.

Milwaukee Aprilia delivered an excellent performance at the Misano World Circuit this weekend, securing a strong third and eighth on Saturday followed by seventh and eighth on Sunday.

Following a strong run in Superpole Eugene delivered his best qualifying of 2018 and lined up P3 on the grid with a lap of 1'34.281. Lorenzo's pace was not far from his teammate and qualified close behind in P5 with a 1'34.400.

At the Race 1 start Eugene made a quick getaway. He held off a challenge from Davies into turn 3, holding third and chasing down Rea and Sykes ahead. Lapping on the leaders' pace, Eugene passed Sykes for second when the latter's pace dropped off. Eugene struggled with an issue on his bike's rear potentiometer late in the race, and went wide at the final corner to open the door for Davies to pass. Despite his set back he closed Davies down to reduce the gap from 1.7 to finish just 0.9 at the finish, and brought his Aprilia home a strong P3 and securing the team's first back-to-back podium run in WorldSBK.

Lorenzo had a more difficult race, losing ground at the start. His pace initially looked strong before his rear tyre began to degrade, forcing him to dig deep to continue his momentum. At the middle distance he and other riders struggled with rising track and tyre temperatures, and he eventually came home P8.

For Race 2 Lorenzo lined up P5 on the second row, while Eugene moved back to start P7 on the third row. At the start of the race both riders lost ground to the competition, Lorenzo gaining the upper hand on his teammate with a strong launch. From there they ran nose to tail, Eugene trailing Lorenzo by less than 0.3s in the early stages. They closed in on Lowes ahead in P6, and gained a position along with the rest of the field when Fores retired from the lead. Lorenzo began to eke out an advantage on Eugene, creating a gap of over 1 second in the middle stages of the race. He held onto his advantage and led home Eugene for a P7-P8 double points finish.

Following their debut on the podium in Laguna Seca the team can be happy with the recent progress they have made and carry the momentum into the final four races of 2018.

WorldSBK now heads into its summer break, returning to racing action at the Portimao circuit in Portugal on the 14th-16th September.

"Saturday was a fantastic day for the team building on the success of the Laguna podium. I felt we strongly deserved a second place with Eugene, he had an issue with the rear potentiometer which affected his anti wheelie and he had a battle on his hands to keep the front wheel down. He entered the last turn in third gear instead of second which ran him wide and Davies got through, but he stuck in there and ground him down from a 1.7 gap to 0.9 at the line so it just shows we are in the right area now.
Lorenzo had a great Superpole and put it on the second row, but didn't have the rear tyre at the end to keep up with the front guys. A few other riders had a similar issue, it was a very hot with 50 degrees track temperature playing an issue.
We tried some new things on Eugene's bike in Sunday warm up but they didn't work, so we reverted to yesterday's Race 1 settings. In Race 2 today he got tangled up with Lorenzo and Lowes on lap 1 which set him back a little bit. Right form the start he had trouble with rear grip he was spinning the tyre and not moving forward .That was the story of his race unfortunately and it was all he could do to bring it home P8.
Lorenzo again struggled with front grip and a full fuel load at the start of Race 2, which meant he couldn’t push. He had to settle into a rhythm unable to put a move on Lowes. Ultimately it was quite a lonely race for them both but we have to be happy with the weekend.
We now head into the summer with a test at Portimao next month which should put us in a good position for a circuit we went well at last year, and we're looking forward to racing there again in September".

"Superpole was a big surprise, I wasn't expecting to end up on the first row. The pace has been good over race distance but qualifying isn't usually our strongest area, and that helped me in the race.
I made a good start from P3 and held off a move from Chaz [Davies]. I managed to pass Sykes after he made a mistake and hold P2, and then Davies was close behind. There was a gap and I thought I could hold onto second, but then there was a sensor failure and I lost some rear grip which made the bike really difficult. It was bitter sweet to get third when I knew second was possible of course but I'm happy with the result for the team.
Race 2 was very strange for me. Compared with yesterday I just had no rear grip from the start, it felt like the rear was cold and just wouldn’t stop spinning. I tried to adapt my riding and find grip when the bike was upright like I normally would but it didn’t happen.
We’ve done a fantastic job overall this weekend to progress the way we have. FP1 wasn’t great but we changed and adapted the bike, and we were nearly set for second yesterday. It was a hell of a performance to back Laguna up with, it was just unfortunate we couldn’t get that extra place heading into the summer.
At the Portimao test we’ll be working on making the bike stop better, that’s the main area we struggle with when battling with other riders. Aprilia have some ideas to try and now that we’ve got the bike in a good place it’s a great opportunity to progress and put ourselves in a good position for the end of the season".

"For the qualifying I was a little disappointed, I think we were able to get pole. I'm not sure why I couldn't feel the extra grip with the qualifying tyre, but fifth was a good result.
In Race 1 I dropped too much time from the lead group at the start. In the middle of the race I was losing more time and I really had to push hard, and then I was losing places. P8 was not so bad but we could have had better, and it gave me a better position for Race 2.
The first part of Race 2 was difficult, and it’s still an area I have problems with. The front tyre and fuel load made the bike hard to ride and I wasn’t able to push. I lost too much time to the guys ahead really, my pace in the middle was not so bad and I got close to Lowes near the end, but I was too far to catch up. If we can improve this area then for sure it will help me a lot to fight.
The Portimao test will be very useful, and I hope to resolve my race start problems. The summer is long but I know the team will work very hard to make us fast, and I want to thank them for all of their hard work.” 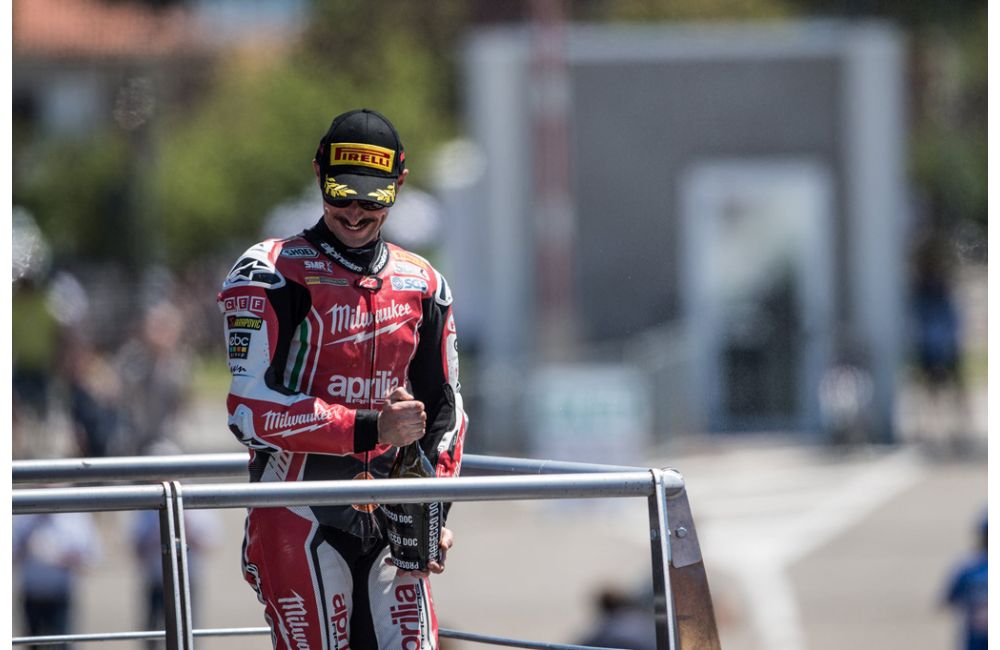