A RETURN TO EXCEED ALL EXPECTATIONS: MAX BIAGGI IS IN THE LEAD IN THE FIRST TWO PRACTICE SESSIONS AT MISANO SBK
HASLAM IN FOURTH AND IMPROVING
TORRES FINISHES THE DAY IN SEVENTH PLACE JUST BEHIND THE LEADERS

Misano Adriatico (Italy), 19 June 2015 – It was expected to be a great return and a great return it was. On his return as a wild card in a World SBK round, Max Biaggi dominated the two free practice sessions on Friday.

Astride “his” Aprilia RSV4 - a bike that he has contributed to developing since it was introduced in 2009 and which he rode to win (the only Italian to do so) two SBK Rider World Championships – Biaggi astonished everyone by finishing the first morning session (FP1) with a time of 1’35.684. But the six-time World Champion improved even more in FP2, once again putting the best time on the sheets and improving on it with an amazing 1’35.380.

It was also a positive day for the Aprilia Racing – Red Devils regular championship riders. Leon Haslam worked hard on race pace, finishing with a strong fourth place at 1’35.652 on an extremely tight time sheet that has 10 riders grouped within just 7 tenths of a second. Jordi Torres, who is tackling the Adriatic circuit for the first time in World SBK, improved steadily during the day, finishing in seventh place at 1’35.966.

Max Biaggi: “I'm happy to be here and I want to sincerely thank Aprilia and the Piaggio Group for having given me this fantastic opportunity. I'm working with the guys from the Noale test team whom I tested with these past months for MotoGP and Superbike and it is both fun and strange to be here in what is no longer a testing atmosphere but a race situation. I am really pleased for them as well. Here I am back in my element of riders, friends, fantastic knights on steel steeds who ride fast, and seeing them from the inside of the competition is much different than commenting them on TV. Now we are thinking about Saturday. I think the farther forward we go the harder it will be. Times will start dropping in practice, tyre availability will go down and we'll be tackling the electronics that I've never tested. We'll see. It won't be simple and we'll also need a bit of luck.”

Leon Haslam: “I'm rather satisfied. We made good progress in the afternoon compared to the morning session. I made a mistake at the end of FP2 on the fast section - maybe one of the fastest crashes of my career! Fortunately there were no consequences, but unfortunately I gave the guys on the team a bit of extra work this evening. The feeling is good and step by step we're finding a good pace, so I'm confident that tomorrow we'll improve even more.”

Jordi Torres: “Today was a good day. I had raced here with Moto2 and despite the fact that the references change quite a bit, it didn't take me long to learn. This lets us start working straight away on tyre life. We weren't able to do that at Portimão and we can't afford not to. I need to improve, especially on the front, both in terms of the RSV4's reactions and my confidence. There are two phases: the setup and my confidence, which must improve hand in hand.”

Romano Albesiano (Aprilia Racing Manager): “An exciting day for us at Aprilia and I'd say a historic day for World SBK. Seeing Max back on the track, seeing him ride that way and achieve this performance, even though he decided a little while ago to really attempt this adventure, it's a great gift for all the fans of our sport. I'm also happy with the performance of our official riders. Leon did very well. He is fine tuning the optimum setups and it's a shame about his crash at the end which will force us to work overtime, but we are obviously on the right track. Jordi is also doing well and he is right there, just behind the leaders in some very tight standings. I think we'll be able to improve with him tomorrow as well.” 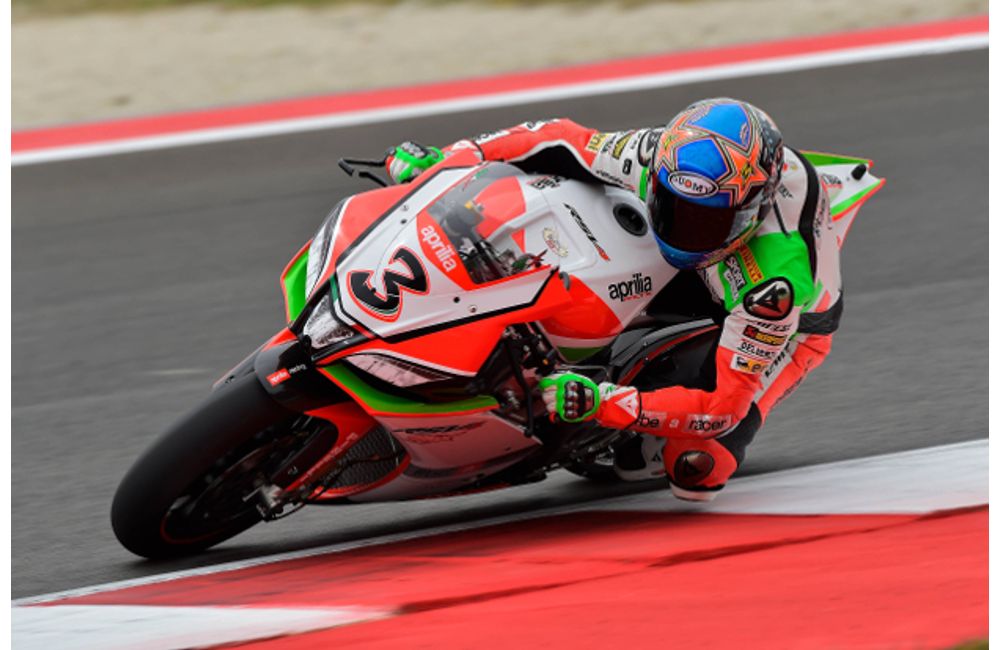