FOLLOWING THE EXTRAORDINARY DOUBLE TITLE TAKEN AT DOHA IN 2014, LEON HASLAM AND JORDI TORRES AIM TO INCREASE APRILIA'S IMPRESSIVE COLLECTION OF WREATHS IN SUPERBIKE: 7 WORLD TITLES IN 5 YEARS OF WSBK

The Italian brand - reigning world champion after winning the 2014 championship with the double Rider-Manufacturer world title, taken at the last round in Doha - is ready for the 2015 season with a revamped structure and two riders making their début on the Aprilia RSV4, the bike that has dominated WSBK in recent years.

Aprilia's world Superbike trophy case is quite impressive: 7 world titles won in just 5 seasons from 2010 to the present. This is an undisputed supremacy in the factory derivative segment that has contributed to enriching the global trophy case in the halls of Aprilia which, with 54 world titles in the various sport motorcycling disciplines (grand prix motorcycle racing, Superbike and Off-road) is one of the most victorious racing divisions of all time.

On the number 91 Aprilia RSV4, managed by Crew Chief Enrico Folegnani's team, is English rider Leon Haslam. The thirty-one year old from Ealing, runner-up world champion in 2010, has already had the chance to show his potential astride the V4 from Noale during the winter tests. On the other side of the garage, under the technical supervision of Lucio Gomes and making his début in World Superbike, is twenty-seven year old Spaniard Jordi Torres on the number 81 Aprilia RSV4.

Aprilia's new Superbike season gets underway, like last year, under the supervision of Romano Albesiano who manages all of the Piaggio Group's racing activities. In a year where Aprilia Racing's efforts will be doubled - after making their début in MotoGP a year ahead of the originally announced schedule - Paolo Bonora will be coordinating the Superbike project on the track, whereas the Aprilia SBK team management structure will be completed by Dario Raimondi, team coordinator, and Andrea Petricca, founder of the Red Devils team which is partnering with Aprilia for this 2015 Superbike season.

Aprilia is taking on the 2015 World Superbike season with goals that its winning history in the factory derivative category demand. "We're the reigning World Champions and we have always played a key role in recent seasons" said Romano Albesiano. "There are some variables that could change things up on the playing field, especially in terms of regulations, but we have worked hard to adapt. We have a good mix of riders and I am pleased with these first test sessions. Leon is a solid and expert rider, runner-up in the 2010 season, and he has already proven to be fast astride the RSV4. For Jordi the first races will certainly be demanding since he'll be dealing with adapting to the new category, but I think he will be able to finish among the best within a reasonably short period.”

The two riders are particularly "fired up" after the first test sessions. "My goal for this season is to win, as it always is" said Leon Haslam, "and this year I'm pretty certain that I have the best possible technical package available to try and do just that. I fell in love with the Aprilia RSV4 from the very first laps. Performance is smooth and the electronics are my best weapon, plus I can count on a professional team that is accustomed to winning. Plus, I'm coming off my first winter break without any physical problems. I'm still not at 100% fitness but I'm improving day by day and I'm working with a highly skilled technical team."

"Being on a team that has won so often in Superbike is a guarantee. I'll need to work hard to take the best possible advantage of this opportunity" stated Jordi Torres. “This year everything is new for me: bike, team, category and even many of the circuits. I'm still working on adapting to all these changes, but I'm confident. My first sensations were very positive. My feeling is improving lap by lap and I can't wait to get down to business so I can show just what I am capable of."

Dario Raimondi is also of the opinion that the Aprilia RSV4s will be in the spotlight from the start: "We have won a lot in recent years. We are the reigning champions, but fortunately that is a 'positive' pressure that we have grown accustomed to dealing with. Even the extraordinary finale at Dona last year demonstrated that. During the winter we worked both on putting together the new structure in the best possible way and on creating the right atmosphere with the new entries. The two new riders have already demonstrated an excellent feeling with the bike and the team. Our rivals will not make life easy for us, but we have all our ducks in a row to play a prominent role again in the 2015 season.”

Andrea Petricca highlighted the two riders' strong motivation: "Leon and Jordi are both fired up and ambitious. They found the RSV4 to be formidable straight away and they know that they have the best possible technical package at their fingertips. In recent years Aprilia has demonstrated all their value among factory derivative bikes and they are one of the favourites, but that doesn't mean it will be a walk in the park. Hard work and concentration will be fundamental, as well as relying on partners who support our Superbike adventure.” 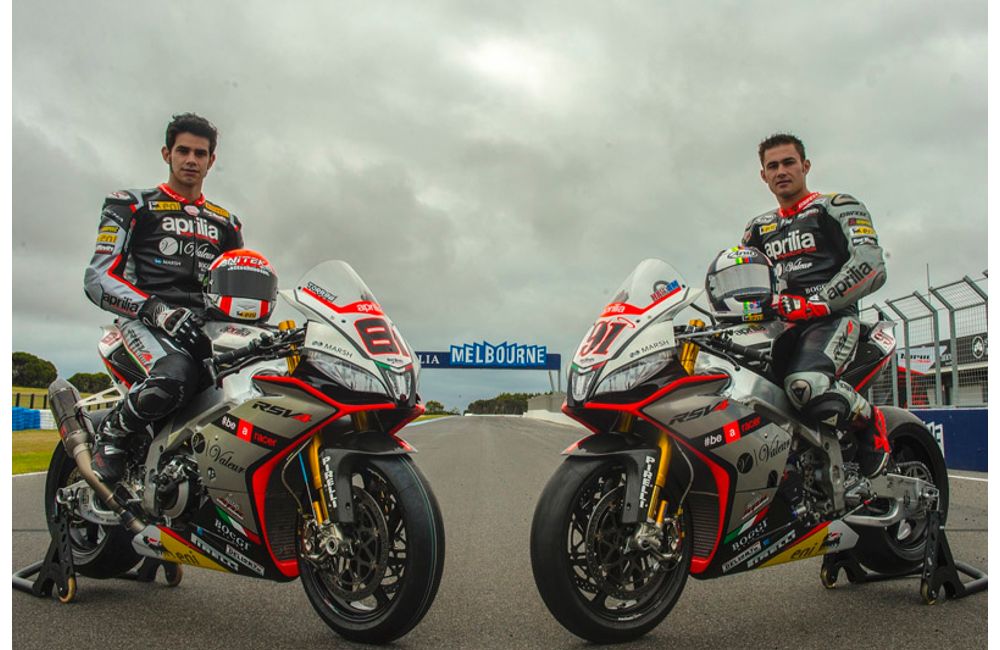