ALVARO BAUTISTA IN THE POINTS ONCE AGAIN AT ARAGON WITH AN EXCELLENT RACE COMING BACK FROM BEHIND. BRADL HELD UP BY TYRE WEAR JUST AS A POINTS FINISH WAS WITHIN REACH

Circuito de Aragon (Spain), 27 September 2015 - Alvaro Bautista's points finish (thirteenth) on his Aprilia RS-GP closes out a positive weekend for Aprilia Racing Team Gresini. Bautista, who started from the twenty-first spot on the grid, had an excellent start which immediately gained several positions for him. However, after getting bottled up in the battle at the first turn, he had to start his comeback from scratch. Without losing heart he set his pace, lapping at very good times which brought him up to battle with the group, recovering positions and finishing his one hundredth MotoGP race in thirteenth place.

Stefan Bradl also rode an excellent race on his number 6 RS-GP, settling in just behind Alvaro in a solid position for points, but in the final laps sudden tyre deterioration forced him back to eighteenth place.

“Overall it was a good weekend. We had absolutely respectable performance, in line with our goals for the season. Alvaro rode a top shelf race despite starting from behind and even after he was bottled up straight away after a good start, losing several positions. He rode a fantastic comeback race, lapping with extremely respectable times and battling it out in the group with Laverty and Vinales. With a better result in practice and without the trouble at the start he would have had the potential to make a play for it in the group with Redding and Hernandez. The gap was also reduced. Stefan also got off the line very well and rode an excellent race until he had problems with tyre deterioration that we need to understand better. In fact, he had a lot of tyre spin and we need to help him manage this problem. Stefan has a different riding style than Alvaro and we need to give him a hand with this.”

“The crash yesterday in qualifying complicated things for Bautista because starting from the back always makes it more difficult to tackle the race. Alvaro rode a great comeback race though, riding in a very determined way, so I'm pleased with the result. Just like other times, maybe we could have brought home a better result, but the important this is that we are solidifying our improvements: for the last several races we've been consistently finishing in the points and today Alvaro could have maintained the same race pace as Hernandez and Redding. I'm sorry for Stefan who, after a brilliant first part of the race, lost a lot of grip at the rear, slipping back. In any case it's nice to have a team with two motivated riders who push one another.”

“I had a great start, gaining a lot of ground in the first few metres but then I was shut out on the first turn and I had to halt my progress. It took me a while to get past Laverty, who was braking very well, and once I had overtaken him I lost some more positions while I was behind Bradl, so I had to start all over again. I managed to overtake Laverty again and Bradl as well and at that point I would have liked to have gone after Vinales but it was too late, so I just held my pace, which was not bad at all, and I'm pleased to have finished in the points again. This was a very positive weekend. We learned a lot, thanks to the team's hard work. Now we need to keep it up in the coming races.”

“Our work on the bike was slowed a bit during practice and today we paid for that in the race. In the last ten laps I didn't have any more rear grip. In Warm Up we had tried various settings, finding one that seemed to give us more grip and in truth I felt very much at ease during the first part of the race. But then all at once, after midrace, grip started to drop little by little. The bike was sliding around a lot and the rear tyre deteriorated very quickly. In the finale contact with Laverty also made me lose contact with the riders in front of me, but at that point I didn't have any chance of attacking them again because I was losing a lot of ground coming out of turns. It's a shame because our performance at the beginning of the race was good. However, this weekend we had various positive notes and in the first half of the race we were fast. We'll keep our feet firmly planted on the ground and take this race as a valuable lesson for the future.” 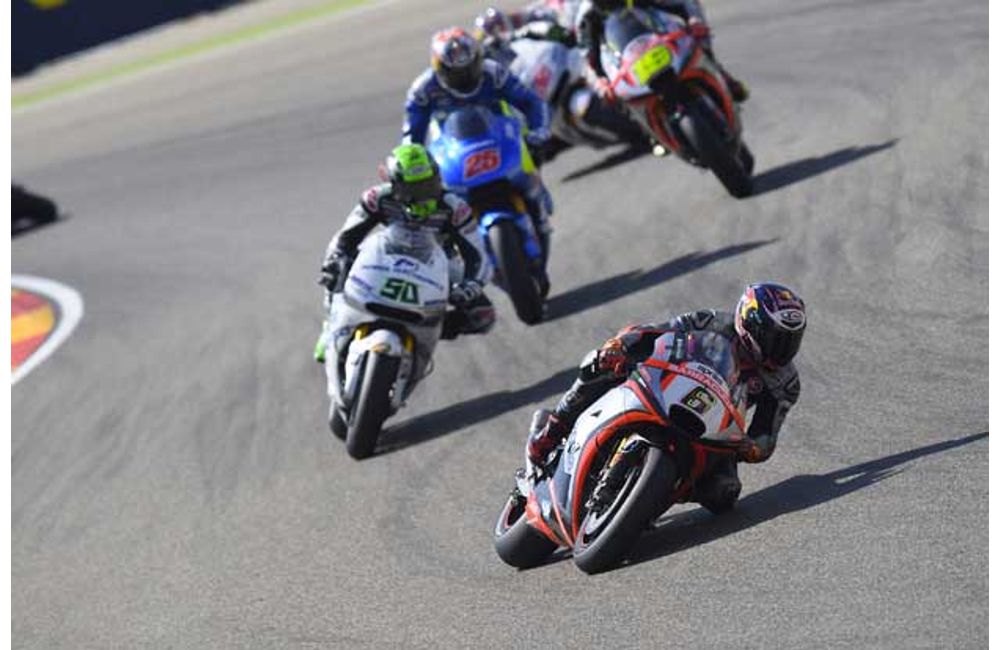