Every since we launched the revamped 2017 Aprilia Tuono V4 1100 besides its superbike brother, the RSV4, at Austin’s Circuit of the Americas, the positivity from the press has not stopped.

One model that continues to impress is our Tuono V4 1100 RR, the “base” naked sportbike that lacks the RF’s Öhlins suspension and Superpole graphics. First the RR won Cycle World's Naked Bike Shootout, and now it has won yet another shootout, this time from Motorcycle.com.

During Motorcycle.com's Supernaked Streetfighter Shootout, the Tuono RR went bar-to-bar with the Yamaha FZ-10, KTM Super Duke R and the BMW S 1000 R.  After five of MO's top staff members put these bikes to the test, the Tuono RR came out on top, winning 94.01 percent of the vote.

When the test wrapped up, author Sean Alexander said "If you ask me, the 2017 Aprilia Tuono V4 1100 RR is the second best motorcycle on earth, right behind the Öhlins-equipped Tuono V4 1100 Factory."

We concur. Here's what the other editors at Motorcycle.com had to say:

Kevin Duke says: “The new Euro 4 exhaust tones down some of the Tuono’s bark, but it’s still the best sounding motor here and perhaps anywhere. The Tuono’s M50 calipers are sensational! Difficult to imagine a better braking system. Love the new TFT gauges, which are comprehensive and easy to read and decipher, and the shift lights are impossible to miss.”

"(The Tuono RR is) amazingly affordable, considering its exotic lineage and bounty of state-of-the-art features. The Tuono is the easy winner in my book, based mostly on its spectacular V-4 that excites in ways no other motorcycle powerplant does. Add in independently adjustable TC, WC and ABS, plus excellent TFT instrumentation, and the Aprilia takes top marks from me. It’s simply the best street motorcycle I’ve ever had the privilege of riding on the street and a racetrack.”

John Burns says: “Has the perfect drivetrain if not the most torque, seamless light up and downshifts at just about any speed… On day two the Tuono felt most perfect circulating Chuckwalla Valley Raceway. It’s a street fighter, but you can tell its ergos were fine-tuned on a race track. At the end of the day when all the tires were tired I could still drag knees with confidence on the Tuono; its front end never wavered, which encourages you to twist the throttle.

"Rock solid, and the afterburner kicks in just at the right time on the straights. Amazingly powerful brakes yet completely stable stopping hard... At my mediocre speed, I feel more comfortable on the slower-steering Aprilia than the comparatively flighty BMW. Somehow, though, its ergos don’t fit me quite as well on the street. The seat feels a bit sharp where it meets my underthighs, the grips aren’t quite at the proper angle for me. It wants you to ride like you’re in Italy, tucked in and going for the gusto constantly. Sometimes you just want to cruise to the beach.”

Evans Brasfield says: “It always comes down to the engine with the Tuono. Although we’re running out of superlatives with this mill, it still bears repeating: Wherever you go on the Tuono, you’re surrounded by the raw sex of the V-4’s exhaust note. Winding the engine out in the canyons or on the race track elicits something akin to a religious experience for gearheads.

"The quick shifter and auto-blipping downshifts means that there’s barely a pause in its mechanical song – one we were lucky enough to listen to for two straight days… and the Brembo brakes provide the perfect counterpoint to the engine’s thrust, attenuating speed like they are directly connected to your synapses. The other bikes all acquitted themselves on the track rather well, but the Aprilia felt truly at home on a closed course. I never managed to drag a peg – unlike with the three other supernakeds, and the Tuono’s slightly heavier steering turned into unflappable stability in high-speed corners. Excuse me… I’m getting a little misty-eyed just thinking about it.

Ryan Adams, who owns a 2015 Tuono V4, says: “I try not to be a Tuono fan boy but honestly it’s difficult when Aprilia continues to produce a platform that pulls at my emotions so viscerally. The V-4 engine powering my Tuono V4R was enough to eke out the S1000R when I was considering the two for purchase.

"Now after having owned a 2015 Tuono V4R for a few years, the new Tuono 1100 RR seems to have all of the answers that had left me questioning my 2015 decision. The fueling is more crisp, the cornering stability and maneuverability borders on telepathic, and the damn seat actually grips no matter what type of riding gear you’re wearing (a significant personal annoyance with my 2015 model).”

For additional information, read our 2017 Aprilia Tuono: What the Media Says.

All photos by Motorcycle.com 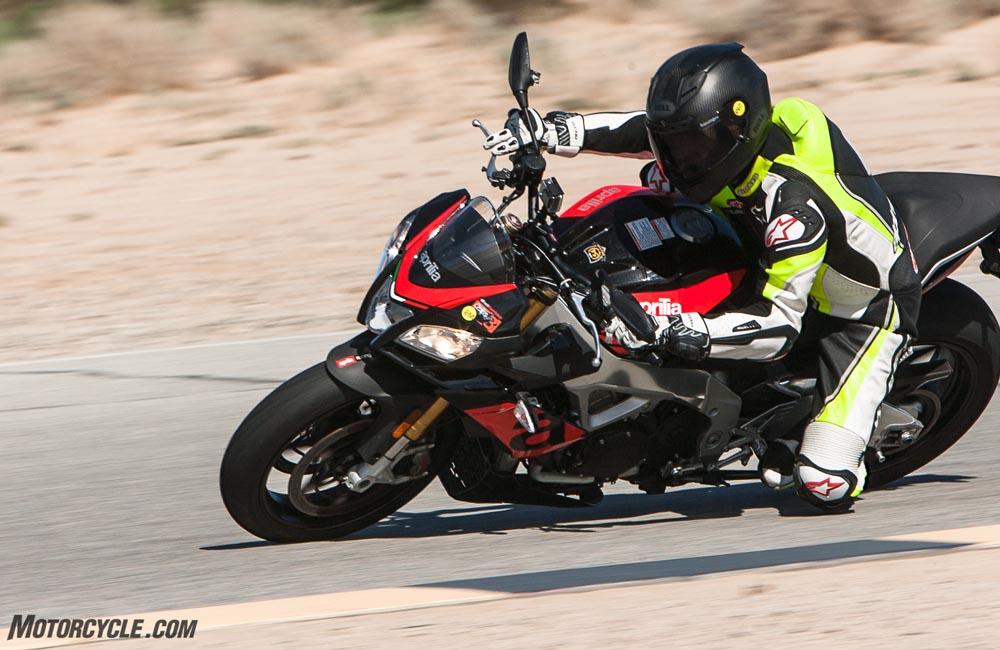