The Piaggio Group goes to Intermot 2016, the Cologne motor show that kicks off the season of large events for the two-wheel world with a series of new products that involve both the Italian Group's motorcycle brands - Aprilia and Moto Guzzi - and Vespa, the most prestigious scooter brand that celebrated its fabulous first seventy years just this year.

Aprilia Tuono 125
Introducing the new Tuono 125 at Cologne, a true street fighter dedicated to the younger rider looking for pure riding fun. Heart and skeleton of a traffic-light-burner in a unique and distinctive look, Tuono 125 maintains all the aggressive style of a large Aprilia. In fact, the line, characterized by the top fairing and the headlight cluster, is entirely inspired by that of the Aprilia Tuono V4 1100. Designed, developed and built in Italy, Aprilia Tuono 125 offers the younger rider the best they can find in terms of design, construction, components and technical features.
The Tuono 125 frame, made entirely in aluminium, is an exclusive in the 125 segment of the “little devil” made in Noale. Designed based on Aprilia's experience on the track it consists of die cast aluminium spars with crossed reinforcement ribs. The beating heart of the Tuono 125 is a modern and technological 125 cc single-cylinder, 4-Stroke, 4-Valve electronic injection engine with liquid cooling: reliable and powerful, it has particularly refined technologies such as double overhead camshaft timing (DOHC).
While still boasting content of a super sport bike, Aprilia Tuono 125 was developed privileging rider and passenger comfort: the riding position is not extreme, the handlebar is positioned to guarantee comfort and, at the same time, maximum control and complete control over the vehicle, the footpegs designed to cut down on fatigue, while rubber inserts on the rider and passenger footpegs provide better vibration damping.

Aprilia RS 125
Symbol of Aprilia's sport DNA, RS 125 has been profoundly revamped to celebrate twenty-five years of success at Intermot. Aprilia RS 125 is still the point of reference for sport bikes dedicated to younger riders, a concentrate of content and style, ready for the best performance on the road and on the track.
Born out of racing, aggressive, capable of expressing dynamic character and light weight in a personal and recognisable style, RS 125 MY2017 highlights Aprilia's passion for sport with a concentrate of technological refinements worthy of a true Superbike. Exclusive ergonomics of a true super sport bike, sleek fairing, aluminium frame, a generous 125 cc 4-Stroke, liquid cooled engine with electronic fuel injection and the best components and technical features in a look that is now even closer to that of the RSV4 superbike. In fact, the Aprilia RS 125's new look takes its inspiration from the shapes and colours of its multiple title winning older sister, the protagonist in World SBK, an aggressive and original look that is highlighted by the triple headlight, a trademark of the most victorious bike of recent years. The sleek fairing enhances the exclusive aluminium frame, an entirely racing-inspired refinement that no competitor can claim.
The general ergonomics of the Aprilia RS 125 are designed for the track. No other 125 can convey a racing character like the eighth-litre from Noale. The riding position on the RS 125 is unique: the semi-handlebars, forward-mounted lower than the steering yoke and the set-back footpegs, along with the saddle-fuel tank assembly, ensure a true super sport riding position without compromise.

Aprilia RSV4
Aprilia RSV4 evolves radically to continue being the best superbike ever. The result of an extraordinary and winning project, born out of Aprilia's successful racing experience, it earns new Öhlins suspension systems, a new braking system and the new APRC electronic controls package that includes cornering ABS and the downshifter. The 201 HP Euro 4 engine combines with a seven-time world superbike champion chassis architecture.
The primary goal followed during development of the new Aprilia RSV4 (in both available versions, RR and RF) is, as always, only one: to be the fastest superbike in the segment. In order to achieve it, Aprilia drew from the best Aprilia Racing technology, refining the already exceptional RSV4 in many aspects, such as electronics, suspension and brakes. Thanks in part to the work done on the powerplant, now compliant with the Euro 4 regulation, without sacrificing anything in terms of power and range of use, the new RSV4 is a second faster than the previous version on average.
In addition to the fourth generation APRC system, RSV4 RR and RF come from the factory standard with advanced multimap Cornering ABS, developed in collaboration with Bosch to guarantee not only extreme safety on the road, but also the best possible performance at the circuit.
RSV4 is powered by the world's first factory production high performance narrow V4 engine, the most revolutionary and powerful engine ever built by Aprilia. An engine that has been made unmistakeable because of the use of “total” electronics, because of its extremely compact size and light weight. The changes implemented in this evolution of the Italian V4 not only resulted in achieving the goals of Euro 4 approval, but also increasing overall reliability and performance, without sacrificing power and maximum torque (which remain respectively at 201 HP at 13,000 rpm and 115 Nm at 10,500 rpm), and not even that inimitable sound that has always been a true soundtrack of the Aprilia V4 engines.

Aprilia Tuono V4 1100
For the fastest and sportiest naked ever, a direct descendant of the RSV4, four-time World SBK champion, a new evolutionary step has arrived which allows exceptional levels of performance to be achieved.
The new, sophisticated electronic management includes an advanced dynamic controls package with APRC, cornering ABS, pit limiter and cruise control.
The inimitable 175 HP V4 earns Euro 4 approval, without sacrificing any of its superb performance. Suspension and brakes have been improved.
The Tuono V4 family of motorbikes is made up of two distinctly outfitted models. Tuono V4 1100 RR represents an exceptional thrill machine, the heir to a dynasty of naked sport bikes acclaimed by critics as the most effective and fastest bike in its segment. Tuono V4 1100 Factory is the more exclusive version, dedicated to an extremely demanding public; this bike is equipped with components which are largely derived from the Aprilia RSV4 RF superbike. The evolutionary step that Aprilia presents for 2017 involves both models which, as before, therefore continue to stand out for their factory outfitting and the graphics.
There are big innovations in the on board electronics department. Aprilia Performance Ride Control is the patented control suite derived directly from the winning technology in world Superbike, the most complete and refined of those available on the market. The fourth generation of APRC, standard on the Tuono V4 1100, fits in perfectly with the fine electronic management of the new, full Ride-by-Wire throttle.
The Tuono V4 1100 is now fitted with the advanced multimap Cornering ABS system, developed in collaboration with Bosch to guarantee maximum safety on the road, without sacrificing any performance on the track. The new ABS system works in unison with the Aprilia RLM (Rear Liftup Mitigation) system that limits the lift of the rear wheel during more abrupt braking. Cornering ABS, fine-tuned in accordance with Aprilia's specific indications, is adjustable to three levels of sensibility and can be switched off. In order to allow riders with various levels of experience to find the best possible combination, each of the three Cornering ABS maps can be combined with any of the three new engine maps (Sport, Track, Race). The latter are all three “full power” and differ in the way they dole out the 175 HP of which the Aprilia V4 is capable, in addition to the percentage of engine brake dedicated to them. 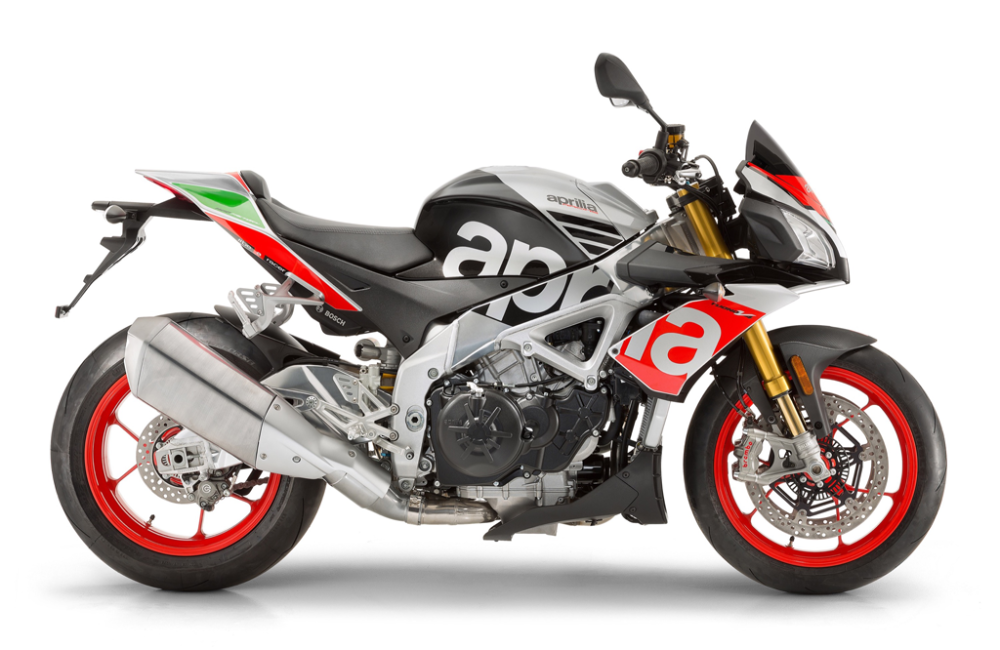