Aprilia RSV4 evolves radically to continue being the best superbike ever the RR version already constitutes a definitive sports platform, whereas the exclusive numbered RF limited edition adds even more sophisticated suspension and wheels which are in any case available as optional equipment on the RR. And with the V4-MP, telemetry arrives as well.
New in 2016: for the RF a new öhlins shock absorber and V4-MP as standard equipment; for the RR and the RF new and attractive graphics.

The fastest and sportiest naked ever gets even better and now becomes unbeatable on the road and on the track.
A direct descendant of the RSV4, the seven-time world SBK champion bike and newly crowned champion on the Superstock 1000 FIM Cup, Aprilia Tuono V4 1100 is adrenaline in its purest state.
The performance of its unrivalled, revamped V4 has been increased to 1100 cc and 175 hp; more efficient to ride thanks to its revamped chassis and the further development of the already exceptional APRC electronics systems package, but at the same time more convenient and even safer for road use.
There are two models in the range – RR and Factory – characterised by a look and distinctive features, but with the typical character of the Tuono heritage. And for the first time telemetry arrives, thanks to the V4-MP platform.

Aprilia is introducing a different version of the already popular, high-tech Caponord 1200 that breaks down the confines of paved roads to become even more versatile and suitable for any trip.
Caponord Rally was born out of the technical expertise of Aprilia, one of the most successful motorcycle manufacturers, with 54 championship titles to its name.
Featuring spoked rims and a 19" front wheel, hard panniers, engine guards, and additional led lights, the Aprilia Caponord 1200 Rally is super equipped and more eclectic, offering better protection and comfort. The high performance of the twin-cylinder is a perfect match for the exceptional chassis features typical of all Aprilia bikes as well as the technological content such as Aprilia dynamic damping (aDD), the patented semi-active suspension system that automatically adapts calibration based on road surface and riding style.
Interaction between the rider and his or her vehicle is guaranteed by the Aprilia Multimedia Platform (a-MP) which interfaces with the smartphone world, an area where Aprilia and the Piaggio Group are on the absolute cutting edge.

V4-MP: THE FUTURE OF BIKE AND RIDER INTERACTION

Aprilia has made research and development on electronics systems applied to motorcycles its banner, moving ahead of its time and offering technologies to the general public which were once reserved for the racing world. Patented electronics systems which are still benchmarks of efficiency and performance: Aprilia was the first manufacturer in the world to equip a wide scale production bike with a Ride-by-Wire electronic throttle (Shiver 750 in 2006), to develop the most complete, advanced, and as yet unrivalled dynamic electronics control platform (APRC in 2010) and a semi-active suspension system (with the possibility of making the rear suspension entirely active) covered by 4 patents capable of adjusting the setup moment by moment based on road surface conditions and the rider's driving style (ADD in 2013).These are just a few of the firsts achieved by Aprilia, which are now joined by the V4-MP multimedia platform.

With V4-MP communication between the vehicle and your smartphone becomes active.

In the rich accessories catalogue dedicated to the Aprilia RSV4 and Tuono V4 you can now find a highly advanced version of the Piaggio Multimedia Platform which transforms your smartphone into a semi-professional tool with exceptional information capacity. Everyone knows that the Piaggio Multimedia Platform is the innovative multimedia platform offered exclusively by the Piaggio Group which allows you to connect your vehicle to your smartphone and consequently to the web. With this exceptional application your smartphone becomes an actual sophisticated on board multifunctional computer and the link between the vehicle and the Internet. This is a window to the future which lays the foundation for a new way of looking at communication on two wheels. Thanks to further development of this fascinating system that Aprilia has fine tuned, communication between vehicle and smartphone becomes active: you can change the settings on your RSV4 and Tuono V4 1100 directly from your smartphone and you can also receive tips in real time on how to improve performance on the track in complete safety.
Some of the more prominent features of V4-MP are:
- Active electronic setup: this is as close as you can get to the “corner-by-corner” electronic management used in world speed championships. Using the GPS feature of your smartphone, the system recognises the position of the bike at any given time on the track and automatically changes the electronic adjustments (traction control and anti-wheelie), corner by corner. This allows you to increase safety and effectiveness on the track, adjusting the control parameters at every point on the circuit and without distractions.
- Adaptive Race Assistant provides tips in real time to safely take the best advantage of your Aprilia. The application compares rider performance to the best lap on the track in real time and assists by immediately indicating how to gradually improve performance.
- Advanced telemetry dashboard: this is a “virtual” dashboard that lets you use your smartphone's display to see, not only all the information on the standard instrument cluster, but also numerous other parameters acquired by the bike's telemetry such as, for example:
o instant power sent to the driveshaft
o instant torque sent to the driveshaft
o percentage of available power
o rear wheel slippage
o longitudinal and lateral acceleration (G-G diagram)
o lean angle
o throttle opening 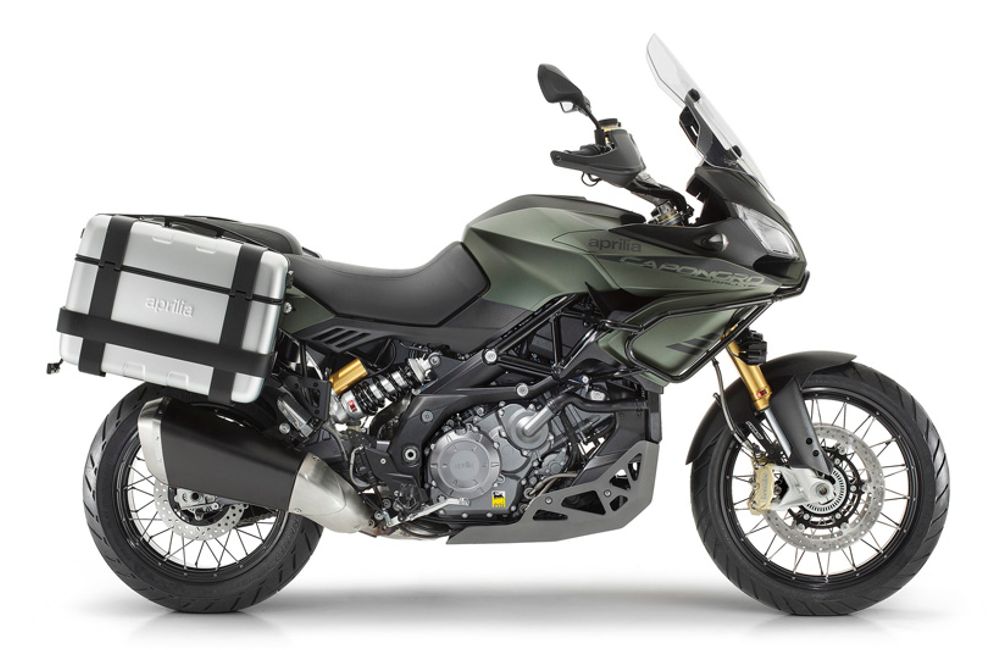